Hip Hinge – What is it and Why should we care? 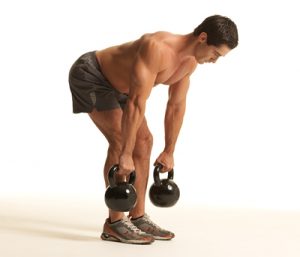 We perform the hip hinge hundreds, maybe even thousands of times per day. We would be here until Christmas if we named all of the times we get in and out of the hip hinge. Any time you bend over, stand up, sit down, or simply move through space you are hip hinging. What is interesting is we tend to lose touch with this movement over the years.

Why? We simply don’t train or even do it with proper mechanics in mind. That type of thinking doesn’t come natural to a lot of us. Before we get into how we improve this movement, it is important to understand the anatomy involved, specifically the posterior chain.

The posterior chain is important. Very important. We can thank the posterior chain for our ability to stand upright. Without it we would just crumble. It involves some of the largest muscle groups of the body and play primary roles in most daily activities. A well-developed posterior chain will not only bulletproof your body against injuries, but might also help drive up your other lifts in the gym. I’ve seen too many people who focus too much time on the “glamour” muscles pecs, delts, bis/tris – and too little time developing the muscles on the other side of the body.

What is the Posterior Chain and Why Do I Need to Strengthen It? 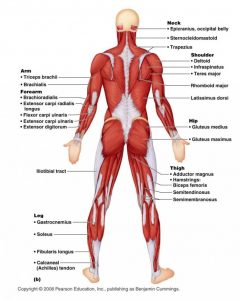 Showing muscles of the posterior chain

The posterior chain refers to the muscle groups that comprise the backside of the body, including the glutes, hamstrings, calves, spinal erectors, traps, and rear delts. Our modern day, sedentary lifestyle has resulted in the majority of people becoming anterior dominant (tight pecs, slouched shoulders, rounded backs).

Long periods of sitting can lead to tighter and shortened quads.  This limits the hip flexors ability to perform their normal role during daily movements and essentially “turns them off,” forcing your body to compensate its movement patterns. Ultimately, the glutes get downgraded in their role of hip extension and hip stabilization, forcing other muscles parts of the body, like the lower back and knees, to take over the work load. This added stress might lead to aches and pains the common areas like the lower back, knees, and hips. Strengthening the posterior chain is essential in preventing and reducing pain in these problem areas and developing a well-rounded, aligned, and functional body.

Now that we understand the what and why behind the anatomy lets get a bit deeper into hip hinge detail and application. Most people confuse the hip hinge with a squat but there are two major differences between them. Squats will involve higher degrees of knee flexion and a more vertical spine as shown in the picture below by Achieve Fitness Boston. (Want to improve your squat? Here are 4 ankle mobility drills to instantly improve your squat)

The hip hinge will involve little to no knee flexion and the spine will be more horizontal. This movement is most commonly associated with the RDL (Romanian Deadlift). The hamstrings and the glutes are two of the strongest and most powerful muscle groups of the body, and the hip hinge is one of the most effective ways to develop both of these muscle groups. 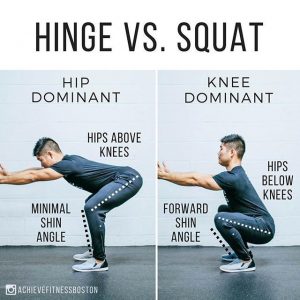 Male showing the difference between the Hip Hinge and the Squat

As you can see from the graphic above, there are obvious differences between the hip hinge and squat. Here are three coaching cues to focus on while performing the hip hinge movement:

Look out next week for some advanced RDL variations you can add to your training repertoire! In the meantime give a these moves some practice so we can start to load them when you get back into the gym.

« Building a Great Home Gym
WGN NEWS & A letter to the fitness community by: Josh Siroko »