Back Squat vs. Front Squat: Which One Should You Be Doing?

Ever wondered what the difference between the back squat and front squat is? Which squat is best for you? Let’s run through both squats and see which one you should be doing in your program.

Squat variations are the foundation to any great training program, but each one has its own pros and cons. Knowing the differences between the back squat and the front squat, along with their advantages and disadvantages, allows you to decide which squat fits your specific body type or training goal and how to best incorporate it into your training program.

Differences Between Back & Front Squat 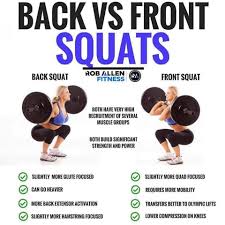 This photo is by: Rob Allen Fitness

The positioning of the bar will have a major influence on which muscle groups the squat primarily targets. When performing the front squat, the torso is forced to stay more vertical than during a back squat in order to prevent the bar from falling off of the front rack position. This will target the anterior side of the body, specifically the quads and the core, to a higher degree than the back squat. This is why the front squat is usually described as a “quad dominant” movement. The front squat also has increased mobility demands in the ankle and the wrists and may be difficult for someone with long femurs and a shorter torso.

When performing the back squat, the barbell resting on the traps and rear delts allows for a little more forward trunk lean during the movement. This will target the posterior side of the body, specifically the glutes, hamstrings, and spinal erectors. This is why the back squat is usually referred to as a “hip dominant” movement. The back squat has slightly less mobility demands but may involve higher shear forces on the spine than its front squat counterpart. Typically individuals are able to front squat 70-80% of their back squat.

Which Squat is Best?

The short is answer is that one isn’t better than the other. Both squats adequately train the lower body and if you were only allowed to train one for the rest of your life you’d still have a solid training program However, on an individual, case by case basis, one squat might be superior based on your goals, body type, and mobility capabilities.

There’s a reason why the back squat is typically deemed the “king of all exercises.” There are few things more impressive than a human balancing a bar on their back with a stack of metal plates clanging and banging as they go up and down. If your goal is total weight, the back squat will be the best option. Consequently, greater load may lead to a greater risk in injury, especially when going too heavy too fast. The back squat position is usually more comfortable to get into for most people, and balancing the bar on your back is a lot less demanding than balancing it in a front rack position.

Both of these reasons are typically why people are able to lift more weight in a back squat than a front squat (but not always). Unless you are planning on competing in a power lifting meet, performing the back squat is not an exercise that you “must” do, but you definitely should be doing some sort of hip dominant squat variation.

The torso is forced into a more vertical position in the bottom of the front squat to prevent the bar from rolling forward and dropping, reducing the overall shear forces on the spine in the process. Front squats are great for preparing people to learn any Olympic style movements and are a great alternative to back squats (and might even increase your back squat strength in the process).

At the end of the day, if you’re squatting you’re doing something right. Back squats and front squats are only two examples of the many different squat variations out there. There’s no rule book that says you have to back or front squat, but unless you are limited by injuries or mobility issues then incorporating these squat variations into your training will lay the foundation to a quality training program.

« WGN NEWS & A letter to the fitness community by: Josh Siroko
3 Easy Ways to Get Moving At Home »